Jack and Jill represent the anima and animus of Jungian psychology. These two split aspects of the self represent the primeval dichotomy of yin and yang from which we seek to transcend. Jack and Jill went up the hill searching for a pail of water. It is evident that the hill is the Grail Mountain and pail of water is symbolic of the Holy Grail, the sacred cup of the sang real, the blood most royal. Jack fell down and broke his crown, and Jill came tumbling after. One is reminded of the Golden Dawn plates of the Garden of Eden before and after the fall. Jack and Jill's ascent represent the paradise of Eden, and their subsequent fall is analogous of Adam and eve being cast out, the donning of the fig leaf. Jack's crown, a symbol for Kether on the tree of Life, has been broken, symbolizing his loss of divine consciousness.

The duality of the playful Jack and Jill is restored to balance and beauty on the Sun card of the major arcana of the Tarot. This card represents the reunion and synthesis of spirit and matter on a now higher level. Jack and Jill stand balanced equally upon the earth and over the water, Matter-spirit, together finding new fractal boundaries. This synthesis only occurs after the chaotic flood shown in the blasted tower, moon and star cards, which are precipitated by the imprisoned influence of the devil card. These sequential cards, 15-21, represent a collective initiation from our enslavement in matter to the heights of spirit, or digital space.

In card 15, the devil, we find a depiction of the dark night of the soul, the current state of collective humanity. This is a doorway into initiation, one that begins in despair and ends in the omega point of integration. This collective dark night of the soul is long and arduous and represents the cocoon of three-dimensionality. This dimensional trance requires influence from outside in order to shatter the chrysalis of the matrix in which we find ourselves. In the blasted tower we see the dual self, male-female, falling from the tower, Migdol. One is hauntingly remind of the men women who jumped from the World Trade Center. The Devil depicts the male/female dichotomy chained and enslaved to the false image of a wrathful god. This is the dominator paradigm which must be toppled before the flood of the outer and extraterrestrial influences of the star card and beyond. Another note, the devil card depicts the averse pentagram in the forehead of the great beast. With its point facing downward it is a symbol of oppression and control. The point on the pentagon in Washington DC, as well points due south, or down. This building was also a target for the 9-11 shockwave. Was this the wake up call of spirit, to break our third dimensional trance? It must remembered that Yushugoth was released from bounds of the pentagon on that ever fateful day. This act was prophecized in "The Illuminatus Trilogy", by Robert Anton Wilson, "In the Himalayas, Graud and the Unbroken Circle watch the destruction of the Pentagon and the massacre of the Atlanteans."

The star card represents Sirius, the Dog Star. This is the one star in sight that the A:.A:. or Illuminati have worshipped in secret since time immemorial. The naked image of Aquarius pouring out the stellar wisdom, knowledge and innovation of the 21st Century is the temporal influence we are moving into, seeing that the twin towers of Babylon were decimated on 9-11, and the blasted tower card has been fulfilled. The moon card represents the projection of our own fears upon the technologies and uncertainties of this Aquarian future. On this card we see the shadowy image of two huge towers through which a path ascends from the ocean to the mountains. A Dog and a Jackal bark at a looming Hierosangmus, the sun and moon conjoined. Emerging from the waters is a lobster, an eloquent symbol of the Outer Ones and the Old Ones. The Hebrew letter associated with the Moon card is Qoph equals 100. Also depicted on this ominous card are four drops of blood, or four yods, which total 40. All this together, we see the Twin Towers and the 140 current combined.

The sun card resolves these shadowy projections and complexes. On it, we find Jack and Jill restored and happily dancing once again upon the grassy knoll. They dance beneath a red brick wall and the beckoning extraterrestrial orb of gold. This is the omega point, the technological singularity. What lies beyond is the mysterious Aeon card. This card shows the entering of heaven by a child and the shadow of the great hawk hours. This imagery symbolizes a new phase for which we have nothing to compare. This is the Aeon of Hoor-Maat, the dual Aquarian current. This is to say in Thelemite semantics, the aeon of adjustment and truth. Beyond the Aeon lies the holographic union with all information, the Bell space, and this is depicted by the Universe card. This entire sequence, from the devil to the universe , is a pictorial fractal wave symbolizing the time period from September 11, 2001 to December 21, 2012. 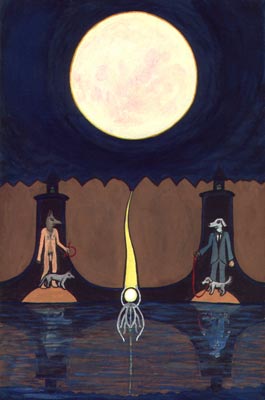 Upon Further Analysis of 9-11 and the Tarot

Who can say if these collective tarot images have subconsciously evoked the events of 9-11? Or rather, Have these catastrophic shock waves moved back through the temporal dimension for visionaries and seekers to witness and record. This act of violence was a noospheric event, being that all people of the earth were tuned in to this horrific scene simultaneously, and it has scared the astral plane irrevocably. This is like throwing a rock into the water, with the ripples moving both forward and backward through time. Being so close to 9-11, the ripples are still many and the ripples abound. As you move further away from the event horizon itself, the ripples become fewer and further between. Recently in our own synchronicity researches, it has become evident that each synchronicity is like a spore, in that one seems to mushroom many more. This begins touching on the irrational and outrageous when the probabilities of occurrence start nearing the impossible.

Our discovery of the 140 current shows that George W Bush = 140, Twin Towers = 140, and Osama Bin Laden =140. This, however, was only the tip of the ice berg, for when we delved deeper, the 140's and synchronicity abounded and came out of the woodwork. These findings can be gleaned from our earlier writings, but this research is still an ongoing study. While researching Humpty Dumpty we found a reference to three integral paths of the tree of life to our own formulas and gnosis. These paths were Daleth, Teth, and Pe., the three exclusive paths that cross horizontally the tree of life. These are the three great wounds of Blue Lodge Masonry and collectively total 93. They represent the triple veil of initiation that the seeker must pass through. When we fuse the 93 current of Crowley with 140 current of 911 and the Ordo Omega Occidentis, we get the number 233, which is equivalent to the Word LoGoS. This is the silent word of LAM(B) spoken in the aeon of Zain and can be seen in the biblical reference of the lamb on Mt. Zion. Mckenna spoke often about the silent Logos he heard and beheld visually while in the psilocybin trance. It was his contention that this universal language was moving toward a visually accessible state.

Dr. J.J. Hurtak of the Academy of Future Science states this about the Logos:

"Through this non-linear cosmic language, our consciousness is expanded to communicate on different levels of reality – activating within our mind and our being a higher perceptual level of communication. This is the opening to the higher Divine Mind which works as a continuous revelatory process through a universal media which transcends the written and spoken word and works with the living word, which emanates as a plural-dimensional hologram of the Many Worlds."

This is the silent word which beckons to us from beyond, leading us out of our decimated situation, into the glorious golden dawn of the future. For, all these apocalyptic symbols are encouraging to the adepts of the Ordo Omega Occidentis, in that they don't represent the end of the world, just an end to the world as we know it. This is a period of passage, initiation, and transformation. 9-11 and the approaching war represent the crescendo of TimeWave Zero, the Mayan 13 Baktun and the Kali Yuga, which will all culminate in the appearance of the KALKI or Horse Avatar on December 12, 2012. The Kalki avatar is the return of Vishnu or the Christ archetype to all people. When Christ spoke of the second coming, he spoke of the grand gnosis of the stellar cults that would awaken in the true initiates and finally dawn on all of mankind. By Hindu Chronology, it is the 10th coming of the Vishnu savior archetype, if you count Buddha in the line of Vashnava avatars. This Horse avatar is depicted in the A.E Waite tarot of the sun card. Here, instead of the Jack and Jill motif, we find a single naked androgynous youth astride a white horse, while bearing a red plume under a gold and glorious sun. This is the higher self merged into the Christos of the Omega Point. This is the avatar that has transcended the boundaries of the 666 frequency, the solar current, and merged with the frequencies of 777, 888, and 999. Then finally all of these master frequencies will be assimilated into the fields of the naught, the negative veils of existence, the OOO.

My name is Michael Brown and I have been collecting tarot cards for 20 years.  I am a fanatical fan of occult themed decks, which to me are the only ones deserving of the name Tarot, given occult roots of the tarot.  Thoth-style decks are my favorite, but some Rider-Waite clones are okay too.